The Grand Traverse Yacht Club is a private, member-owned club on the West Grand Traverse Bay of Lake Michigan dedicated to the recreational and social interests of our members since 1960. 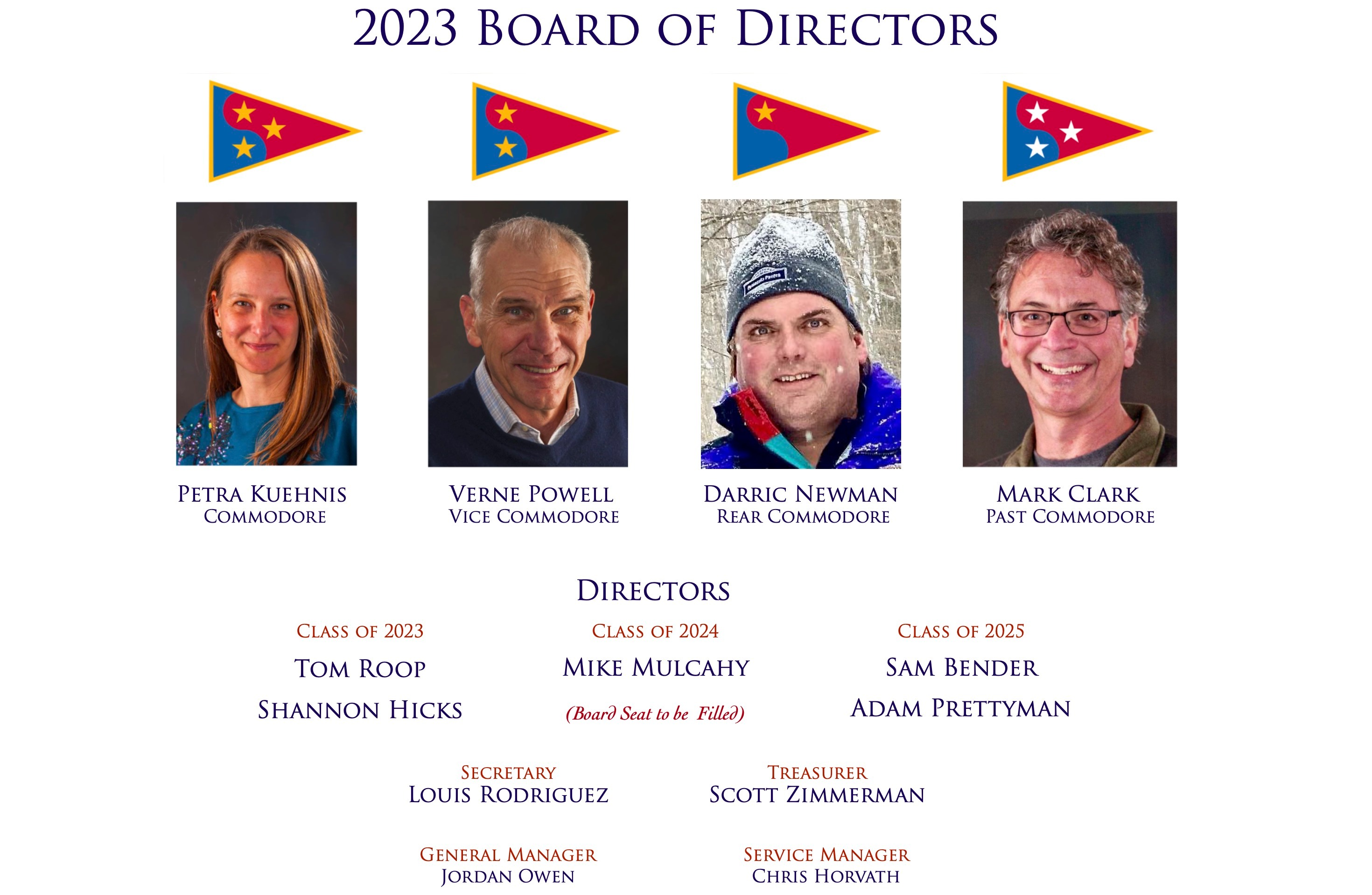 Over 60 Years of Tradition & 130 Years of Heritage

Postcard, c. 1900, of sailboat with designer/builder V.E. Montague at the helm. The We-Que-Tong Club at the mouth of the Boardman River is just in front of the jib along the shore.

In May 1894, a small group of prominent local businessmen who were also the leading sportsmen of Traverse City gathered to organize a waterfront club as a home for their interests in rowing, sailing, canoeing, swimming, and trap-shooting. By August of that year, the new We-Que-Tong Club opened a three-story clubhouse on Indian Point near the mouth of the Boardman River with its first Annual Regatta, matching rowing crews from Grand Rapids and Detroit against the local clubmen in the featured finale. Over the next forty years, the health of the We-Que-Tong Club rose and fell with the challenges and benefits brought by the lively pace of progress of the early 20th century. Gasoline-fueled motor launches grew to prominence on the bay in parallel with the rise of automobiles.  As the fortunes of the region shifted away from lumber and manufacturing, the driver of the local economy became agriculture. At the same time, new distractions and fashions appeared such as bicycles, golf, team sports, and motion pictures that drew people away from the water. State and local roads ashore improved as travel by water aboard the local steamer lines faded away. In the late 1920s and into the 30s, the newly-organized Grand Traverse Boat Club called the clubhouse home as the host of local powerboat regattas and the source of racers traveling to regattas around Lake Michigan. By 1935, the We-Que-Tong clubhouse was sold by its member shareholders to the city to serve as a public facility. In 1945, the clubhouse was condemned and dismantled for kindling.

With the return of young veterans from the Second World War, new efforts emerged to organize recreational boating in the Grand Traverse area. Building on examples found in Leland, Northport Point, Omena, and Suttons Bay, a group of Traverse City small boat sailors organized in 1947 as the Grand Traverse Yacht Club. Sailing predominately in the Lightning one-design class, members also raced in Snipes and Stars locally and around Northern Michigan. This initial effort lasted into the first years of the 1950s with one-design races held as part of the National Cherry Festival.

After a generation without a waterfront club, a group of Traverse City sailors and boaters gathered in the fall of 1959 to recruit and organize the charter membership of the new Grand Traverse Yacht Club for the summer of 1960. In the two seasons prior, a group of sailors centered around the Darrow Marine Base in Greilickville organized races to Harbor Springs and Charlevoix. Many of those sailors were also active locally in the Lightning one-design class and had been part of the initial GTYC. Under the leadership of Dr. Bus Haberlein, who would serve as the first Commodore, 38 member families enrolled by June 1, 1960, as the charter members of the Grand Traverse Yacht Club.  From the inaugural season, the club functioned out of rented rooms on the lower level of what is now Harbor West. From the first call for prospective members, the Club sought small boat sailors, cruising boat sailors, power boaters, and outboard motorboaters to join the new organization

In the early years, the core of the membership would form around sailors active in the Lightning class and “cruising class” sailors, who raced larger keelboats scored by handicap. By the mid-60s, the May through September calendar took a familiar pattern of a mix of triangle races on the bay, destination races to Northport, Leland, Charlevoix, and Harbor Springs, and hosting local and regional one-design regattas. In the early months of the year, the annual calendar was finalized, responsibilities assigned for every occasion, and details set for the coming months

From the beginning, Club leadership sought to establish a permanent club facility, with first efforts envisioning a clubhouse on the grounds of Clinch Marina on the Traverse City waterfront. Discussions broadened to consider building on the grounds of the Darrow Marine Basin in Elmwood Township. In early spring 1966, with plans drawn, a contractor retained, and a lease of property ready, the Club was on schedule to break ground at the Elmwood Township waterfront site.  In May of that year, an alternative to the agreed plan arrived with the availability of the former MontaMower factory property near the intersection of West Bay Shore Drive and Carter Road. The proposition, introduced by Gordon Cornwell, was quickly debated and a deal for purchase was struck with the Montague family, the property owners whose father had been a founder of the We-Que-Tong Club.  A land contract was agreed for $35,000, funded by a private bond issue subscribed by club members.

On the water, the “cruising class” of larger sailboats began racing a schedule of familiar events under a handicap system based on the Cruising Class of America rule. By 1971, the Club switched to the International Offshore Rule during an era of active competition within the region and beyond. At that time a separate local fleet for smaller keelboats was organized under the Midget Ocean Racing Club rule. By the early 1980s, the Club transitioned to the Performance Handicap Rating Fleet formula, which is still used today.

In small boats, the Lightning one-design class remained active as a centerboard class from the Club’s founding until the late 1980s. By the mid-1970s, the singlehanded Laser dinghy gained popularity and developed an active fleet within the club, active to this day with the annual Babel Cup series. In the late 1990s, the Interlake centerboard was introduced to the club and took root, and has since hosted their National regatta in Traverse City four times.

Among early activities developed by the club included a junior sailing program, which would continue in some form from the 1960s until 1994 when our members initiated the efforts to create the Traverse Area Community Sailing non-profit organization. To this day, GTYC continues to support TACS as a cooperating partner, hosting high school and youth programs during the sailing season.

On the water, our members have recorded a long history of achievement at all levels of sailing, winning World, North American, and National championships in both salt and freshwaters. On Lake Michigan, GTYC has acquitted itself at the highest levels in the Chicago Yacht Club’s annual Race to Mackinac with multiple section wins and a team victory in the Point Betsie Yacht Club Challenge.

On the recreational side, cruising sailors carry the GTYC burgee far and wide, from the Mediterranean to the coastal waters of British Columbia,  and throughout the inland and intercoastal waterways.

GTYC also has a long history as the host and organizer of major championship regattas at the North American, National, and regional levels. In 2014, GTYC was host to the US Sailing Chubb Junior National Championships, drawing young sailors from across the country for a week of racing on West Grand Traverse Bay.

By the mid-80s, club life expanded with the addition of regularly scheduled weeknight races, the acquisition of a club liquor license, and the hiring of a club manager. These developments shaped much of what is recognizable in club life today.

In April of 2008, the cinderblock structure of the GTYC clubhouse was struck by a fire that required a total replacement of the structure. In short order, the Club leadership developed a plan to rebuild on the same footprint with a new design that retained much of the flavor of the original clubhouse with an expansion of resources and amenities. The new clubhouse was opened in May 2009 with the raising of Club colors on the same yardarm that was installed in 1967.